No products in the cart.

We use cookies to ensure that we give you the best experience on our website.
← Back to login

So, why is my car smoking?

Smoke coming from a vehicle is a bad sign. It could be a simple issue, but most likely there is something seriously wrong with your car.

What Makes a Car Smoke?

The most common cause of smoke under the hood is small amounts of motor oil or other fluids accidentally spilled or leaking from a bad gasket or seal onto a hot engine or the exhaust system. Those other fluids may include engine coolant, power steering, brake and transmission fluid, and even window washer solvent. This smoke is usually harmless, but it needs to be addressed as soon as possible.

It’s normal to see a small puff of white smoke coming from your tailpipe when starting your car after it sits overnight — it’s only water vapor. You may also see steam rising from under the hood on a rainy day as the water burns off the radiator or exhaust. But if you’re driving and notice smoke billowing from the engine or tailpipe, don’t panic — yet. Knowing what the color (or smell) of the smoke means may help you identify the cause and determine whether to stop immediately or keep driving to a repair shop.

What Makes a Car Smoke?

The most common cause of smoke under the hood is small amounts of motor oil or other fluids accidentally spilled or leaking from a bad gasket or value cover seal onto a hot engine or the exhaust system. Those other fluids may include engine coolant, power steering, brake and transmission fluid, and even window washer solvent. This smoke is usually harmless, but it needs to be addressed right away.

A cloud of smoke from the tailpipe or beneath the hood, however, usually means a serious mechanical or electrical failure.

What you should Do If your Car Begins Smoking?

Pull over immediately and determine if your car is safe to drive — safety is the main concern, and always prepare on the side of caution. Check the gauges and warning lights to see if the engine is overheating, if the oil light is on, if the oil pressure is low or if the Check Engine light is on.

Do a quick visual inspection. You could have run over a plastic bag that is burning on the catalytic converter or exhaust. Never touch or work on a hot engine. Wait until the engine cools down and check the fluids. However, if you see fluids dripping or puddles forming under the hood or on the ground, it’s time to call for a tow. You risk severe damage to your vehicle if it runs out of coolant, transmission fluid, or motor oil, which will require extensive (and expensive!) repairs.

What Do the Different Colors (and Smells!) of Smoke Mean?

White smoke from the tailpipe indicates coolant from a bad head gasket or another failed internal engine part is burning in the combustion chamber.
A blown radiator hose spraying coolant onto a hot engine will also produce wispy white smoke that looks like steam. Smoking coolant has a sweet pungent odor and can feel oily if rubbed between your fingers.

Blue or gray smoke and a pungent, bitter odor from the tailpipe signal the engine is burning oil. Possible causes are leaking valve seals, worn or seized piston rings, a plugged PCV valve, overfilling the crankcase, failing to change the oil regularly, or using the wrong type of oil. Oil consumption without external leaks or blue smoke indicates oil is slowly burning in the engine. Try changing to a high-mileage or thicker motor oil.

Transmission fluid sucked into the intake manifold from a defective transmission vacuum modulator will produce thick grayish smoke from the tailpipe.

Black smoke usually means the vehicle is burning raw fuel. A leaking fuel injector, defective fuel pressure regulator, or failed engine sensor, or ignition component results in incomplete combustion, which allows raw unburned fuel to make its way into the exhaust system and out the tailpipe. Black smoke from one of these conditions will smell like, well, gasoline.

Until the issue is repaired, your vehicle will run poorly and have poor gas mileage, possibly even damaging the O2 sensor and catalytic converter.

Leave Us a Review

Love our services? Do you have anything to tell others about us? Visit the links below and leave us a review. We would love to hear from you
Google • Facebook • Yelp

Did you love our article? Share it with friends and family

DIY Car Maintenance: How to Change Your Car’s Battery 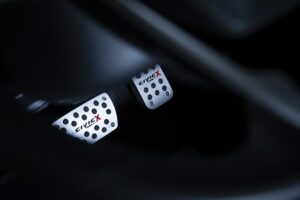